What to Look for When Buying a Computer

​After 4 years, most computers are beginning to cost your business money. Lost productivity from downtime and the cost of out-of-warranty repairs add up quickly – it just makes sense to replace aging hardware. But, as anyone who has gone shopping for PCs can attest, there are literally thousands of options and it can be hard to know where to begin!

This buying guide covers the most important factors to consider when purchasing a new business computer.

What will the PC be used for?

The first question to ask yourself when shopping for a new computer is “How will this computer be used?” It is important that you choose a form factor which matches your needs.

A desktop computer is almost always going to give you the best value, performance, longevity, and upgradeability. These benefits come primarily at the cost of portability – moving a desktop from one place to another, while possible, is very inconvenient.

Desktops also require you to have all of the associated peripherals: monitor, mouse, keyboard, speaker, and webcam. The good news is that your old keyboard can easily be transferred to your new computer!

Finally, desktops physically take up a fair amount of space and may require cable management to keep your workspace from looking cluttered.

The term all-in-one refers to a computer which integrates the desktop computer with a screen. These machines are often very sleek looking and may include built-in speakers and a webcam.

Despite the name, they still require you bring your own keyboard and mouse. While not particularly convenient to move about, they are simpler to transport than desktops. Due to the size constraints imposed on them by their form factor, they are harder to upgrade and don’t provide the same level of performance as a similarly priced desktop.

Laptops are the most versatile type of computer, but this jack-of-all trades comes with some drawbacks worth considering. Small (13 inch screen size) and mid-sized (15 inch) laptops are easy to travel with and can be quickly set up at a cafe for working on the go.

A common complaint about working on laptops is that their keyboard, trackpad, and small screen can be poor substitutes for a full sized keyboard, mouse, and screen. A way to bypass this concern is by using a docking station – allowing your employees to quickly connect their laptop to a wide variety of peripherals. This allows your staff to enjoy the ergonomics of a desktop while still taking advantage of a laptop’s portability.

Due to their small size, laptops usually offer less computing power than desktops. There are powerful laptops that are suitable for video editing or gaming, but these are often heavier, have relatively short battery life, and cost significantly more than equivalent desktops.

A downside of their small size is that these devices may run hot, causing accelerated wear. This, in combination with the stress of constantly being moved around, means that laptops will generally not last as long as desktops.

Finally, some laptop components may not be upgradeable or there may be limited upgrade options available.

Tablet computers have become increasingly capable and can now adequately serve as a replacement for a laptop. These tiny computers can be used by themselves like a giant smartphone or hooked up to a mouse and keyboard for a more traditional computing experience.

For small businesses tablets are best used as points of sale or for salespeople who need maximum portability.

Tablets are generally not upgradeable and tend to cost considerably more than laptops or desktops of similar or even greater performance. Unlike traditional computers, tablets usually can only be installed with apps, limiting their functionality to software which is available on their app store.

Windows is made by Microsoft, and is the most commonly used operating system and offers the widest range of software and hardware options. Windows 11 is the current version, but some manufacturers may still be selling computers installed with Windows 10.
Mac is Apple’s operating system and is the top choice for audio and video professionals. Macs offer a more limited range of software choices, but you can expect a high level of refinement from the available programs.
Chrome OS is Google’s operating system for budget laptops like Chromebooks and is best suited for light computing needs such as word processing and web browsing.
Linux comes in many different flavors and is regarded as powerful but not particularly user-friendly. This operating system is mainly used by IT professionals or to host servers and databases.

Deciding how much you are willing to pay for a computer can be a challenge. A cheap computer is a bad value proposition. Often they will be slow today and inadequate tomorrow. On the other hand, a top of the line computer will probably have more performance than you will need during its lifetime.

High end computers have their role, and if your uses involve editing graphics, CAD files, or even working with extremely large Excel spreadsheets, then this is the direction to go. Graphics intensive processing in particular requires a good graphics card, a feature rarely found on mid-range devices. Large datasets will be easier to work with if your computer has more RAM, which is often an optional upgrade at the time of purchase.

For laptops in particular, keep in mind that business models tend to be pricier than consumer models, but this extra cost often comes with more robust build quality, more security, and better warranties.

Note: Premium consumer laptop models often have features which may harm productivity. For example, a beautiful OLED screen is great for watching movies, but will provide for a shorter battery life.

There are two main chip makers: Intel and AMD. Over the years each company has taken its turn as the industry leader, and currently AMD’s offerings are regarded as delivering better performance and value than Intel processors.

However due to the ongoing chip-shortage you may find your choices are limited to what’s currently available and both companies make serviceable processors.

For most businesses AMD’s Ryzen 5 or Intel’s Core i5 model lines will be more than adequate. For lighter uses the Ryzen 3 or Core i3 may suffice, but these models are less futureproof.

The faster chips like the Ryzen 7 or Intel i9 are likely to be overkill for all but the most specialized needs. In laptops these faster chips can actually result in shorter battery life, so should only be specced if they are needed.

Once upon a time hard disk drives (HDDs) were the only mainstream storage option – but today solid state drives (SSDs) dominate the market.

For desktops it is easy to upgrade storage at a later time, while laptops and all-in-ones may have few or no storage upgrades available. The bare minimum storage to consider is 256 gigabytes (GB) – and smaller hard drives are becoming less common.

While your computer’s primary drive should be an SSD (SSDs are noticeably faster than HDDs), an inexpensive way to boost your storage is to choose a large capacity HDD as a secondary storage device. You can easily and affordably get a 1 or 2 terabyte HDD to store backups, training videos, or other infrequently used files.

Computer memory, or RAM (random access memory), is sometimes confused with storage, but plays a very different role. While a hard drive stores documents, pictures, files, and programs, RAM is the storage space that your computer uses to run its programs.

Having enough memory allows your computer to more effectively multitask, running several programs at once. If you have ever encountered a computer which slows down as more windows are opened, it is likely that this is due to a shortage of RAM.

Budget computers today may come with as little as 4GB of memory, while most mid-range models start at 8GB and go up from there. Generally, 4GB is going to be too little and 8 should be the minimum to consider. If you can spend a little more, it may be wise to choose a model with 16GB of RAM.

Graphic designers and other power users should look at models with 32 or even 64GB or RAM. Keep in mind that having more RAM than necessary won’t speed up your computer, however it may stave off the eventual performance decline that all computers experience as newer, more demanding software gets installed.

Note: Adding RAM to a desktop is typically fairly easy while many laptops cannot have their RAM upgraded.

In addition to the amount of RAM, you should consider the speed of your RAM. Currently DDR5 is the top spec RAM available, although DDR4 is more common and will be adequate for most users. 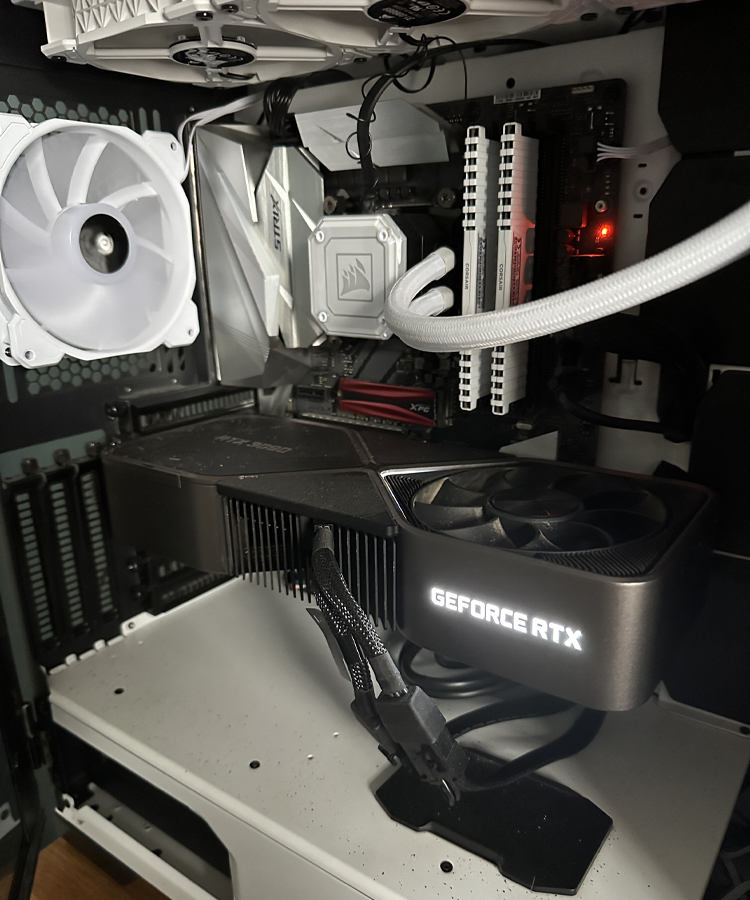 A graphics card (also known as a GPU or video card) is a type of processor that is tasked with rendering video content. Most computers come with integrated graphics cards – meaning that the graphics card is built into the motherboard or CPU and shares its resources.

Integrated graphics cards can be surprisingly capable, with Intel’s Iris Xe integrated card being able to simultaneously output to three 4k HDR monitors. With that said, anyone who is doing video editing will need a dedicated graphics card.

Most laptops use integrated graphics cards, although some high end models can be equipped with a dedicated card.

Warranties and return policies vary greatly from brand to brand, but most offer a 1 year warranty. Laptops usually have shorter warranty durations than desktops. Many companies offer their customers the ability to purchase extended warranties – and this may be a good option to consider if your employees are hard on their equipment.

One major advantage of business laptops over consumer grade laptops is that manufacturers often offer on-site service, sometimes even providing it within 1 business day of the service request. Dell, for example, ships repair parts to local technicians via overnight shipping, allowing for expedited repair. Look for a “Service Level Agreement” which will state the timeframe in which repairs will happen. For mission critical hardware, like servers, this may be measured in hours.

Consumer devices, on the other hand, generally don’t offer a SLA and will require you to send your computer to the manufacturer for repairs. This could mean that your business is without an essential piece of hardware for days or weeks!

With video calls and meetings becoming the norm, a webcam is an essential part of any new computer. Most laptops cameras come with 720p resolution but we recommend that you look for models with 1080p as they provide much better image quality.

Choosing the right computer for your small business is a big decision. Every business has unique needs and the best laptop for one industry might be completely inadequate for another. It’s essential to assess your own needs and make sure that whatever you choose will meet those needs both today and in the near future.

If you still feel like this is too hard of a decision, at Bristeeri Tech we can help you select a computer that is right for your business needs.

← Should I always use a VPN? 8 Ways to Make Your Small Business Network More Secure →
