What Is a Good Internet Speed, and How Much for Upload and Download?

Whether it’s for business use, streaming video, social media, or shopping, internet speed matters. Depending on what you’re working on, the rate of your upload and download speeds may be the difference in booking a new client, turning a project in on time, communicating with your team members, or simply having access to your files. In other words, your internet speed may actually impact your bottom line.

Working in technology and computer solutions, one question that comes up time and time again is, “What is a good internet speed?” And, on a related note, people often ask us, “How much speed should I have for uploads and downloads?” These are both great questions, and they’re very much connected to one another.

How Is Internet Speed Measured?

The speed of your home or business internet is governed by the amount of data that your connection can handle. This comes in two forms: download (aka, “download speeds”) or upload (aka, “upload speeds”).

Downloading is anytime that you request files from somewhere else on the internet and deliver them to your computer; this happens constantly, like whenever you view a webpage (such as this one!). Uploading is anytime that you send files from your computer to somewhere else on the web, such as when posting a family photo to Facebook or sending an email.

You are both uploading and downloading whenever you do a Zoom or Skype call, since you’re viewing video from others and sending them your own video. Both upload and download are always calculated as some amount of data per second.

Since data itself is measured in something called “bits” or “bytes”, your internet speed is calculated this way as well. File sizes for anything from emails to pictures to videos all begin with individual bytes and work upward from there, to kilobytes (kb), megabytes (mb) and gigabytes (gb). Each one of these refers to thousands and thousands of bytes being delivered to your computer every single second.

That’s why, when you’re looking up internet speeds with your internet service provider (ISP), you’ll usually see Mbps or Gbps listed as the measurement. If your ISP can provide 50Mbps (fifty megabits per second), then that’s considered the speed of your internet.

As defined by the Federal Communications Commission (FCC), a broadband internet connection must have a certain minimum download speed. This speed is currently set at 25 Mbps (25 megabits per second) for downloads, and 3 Mbps (3 megabits per second) for uploads. Fiber internet is another type, and the speeds here can go lightning fast, reaching or even exceeding 1 Gbps — aka, 1,000 Mbps.

From this starting point of broadband, we can quickly gauge whether a certain person or business has a good internet speed. One important point to remember is that there are several factors that can ultimately affect your personal internet speed and upload/download performance. For instance, the more devices that are connected to a single internet connection, the slower that connection will generally be. There’s simply not enough “bandwidth” to process all those data requests at the same time.

When this happens, it’s almost exactly like a bottleneck of traffic on the highway. When a road with four lanes gets temporarily closed down to just one lane due to an accident or construction, all the cars are forced to use the same lane and slow down. This is the same principle as having a bunch of different computers or other devices connected to one internet connection, whether at home or at work.

With all that in mind, we can take a look at what is considered a “fast” or “slow” internet speed, depending on its relation to standard broadband. If your business gets internet that is a lot faster than the typical broadband connection we discussed above, then this is usually regarded as fast internet. On the other hand, if your internet speed is below those normal broadband connection limits, then that would generally be considered slow internet.

Of course, not all “fast” internet is created equal, and fast internet speeds can range pretty widely themselves. Further, you have to consider both upload and download separately, since the speeds for each one vary as well. Let’s take a look at all these factors that go into a good internet speed.

What Difference Does a Good Internet Speed Make? 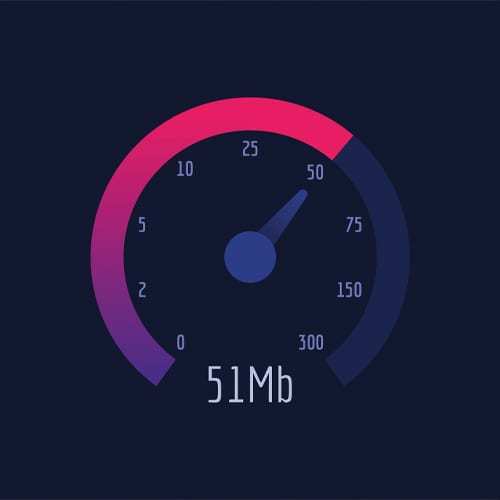 Generally speaking, if you have upload speeds of 10 Mbps or higher, then that’s typically considered a good internet speed, because this allows for most common internet activity. If you have a good internet speed/connection, then your experience on the internet will be much better, more enjoyable, and require less waiting time for files to send or videos to buffer.

Here’s a few examples of internet activity and how much speed you need for it, with cases for both upload and download (in order, from least to greatest):

These are just a few examples, but the vast majority of your activity online will fall somewhere in the range above, from Instagram (small photos) to Netflix (HD videos), with some requiring even less (like simple email), and very few requiring more.

As mentioned above, 10 Mbps download speed would be more than enough for all of these activities, which is offered widely across the United States. In fact, most ISPs offer much higher than this in all but the most rural or remote locations. However, if you don’t have at least a standard broadband connection, your internet activity could become very difficult and frustrating, especially if you’re trying to conduct business.

If you’re curious whether your internet speed is up to par, or if you want to know how long a certain size file will take to download, there are speed tests and calculators available online for free.

To determine your exact internet speed right now, you can use SpeedTest.net. This website has been around for a long time and trusted by millions of people to figure out their internet speed. To figure out how long a certain file will take to download, you simply input the answer from the speed test above into the speed section and then add the file size to Omnicalculator. Their bandwidth calculator will instantly give you the answer in time required to download.

As you can see, having a good internet speed matters. If you’re struggling with your internet service speeds or you simply want someone to inspect your existing infrastructure, then you’re in the right place. Give us a call or email at Bristeeri today, and we’ll get your internet issues squared away and get you back to your work and your life in no time.

Bristeeri Tech Can Help! Let Us Be Your Personal IT Department!