We get used to things moving and changing so fast due to digital technology, that we often don’t notice how we might fall for old-school tricks that have been around for decades. For example, even the earliest days of email were full of scams that sought to get enough information from an unsuspecting user to hack their bank accounts. And that doesn’t even cover how hackers often gather credit card numbers, log in names, and passwords to sell to the highest bidder. These days, this kind of hacking is trivial, so much so that sites on the dark web offer tools (with help desk support) that help hackers launch attacks.

These days, hackers still use emails and fake websites to trick users into turning over their private data through a technique called “phishing”.

And while many of us probably think we are too smart to fall for an obvious scam, phishing attacks are actually quite sophisticated. The FBI claimed in 2017 that phishing scams could cost businesses upwards of 5 billion dollars. Even those seemingly most familiar with the newest technologies–students–are some of the most likely targets for phishing attacks.

The key to avoid being a victim of phishing attacks is to understand what they are, and how to avoid them.

“Phishing” is a term used to describe social engineer techniques used by hackers to gain the trust of users through official-looking communications, typically through email. These communications will often appear as an official email from an organization, like a school or a bank, and direct the receiver to provide personal data. Sometimes, the email will ask the user for information directly. More subtle phishing attempts will copy branding and official emails from prominent companies. Attackers will simply change links in the emails to direct users to fake websites (also designed to mimic a company brand) where they will ask users for their login information.

Much like its namesake activity, hackers will “fish” for victims in a pool of unsuspecting users. Typically, there are two different approaches to fishing: 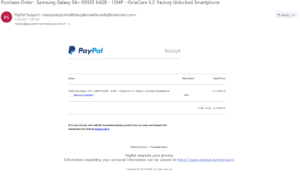 Here is an example of an email crafted for phishing purposes. In it, the sender has taken on the identity of PayPal. The email itself is a close replica of an email the real PayPal might send out, with specific information changed or falsified to get a response from the reader.

Some portions of the email signal that it is a fake right away. Most noticeably, the sender of the email is not actually from a PayPal email address (even though they tried to fake, or “spoof”, the address). But the rest of the email looks pretty authentic. More than that, it raises the concern that the user’s account has been accessed without their authorization. If someone received this email had a PayPal account tied to that email, and they got a notice that someone changed their security questions, it would immediately raise red flags.

What an email like this counts on, is that the reader will panic. That concern leads the reader to glance over the document, and to ignore certain aspects of it that would mark it as falsified. In that case, they may send the hacker the information requested before even thinking about it.

How Do I Avoid Getting Hooked by a Phishing Attack?

Identifying a phishing attack isn’t always easy if you don’t stop to take in all the information. If you follow some basic precautions, however, then you can typically avoid any issues.

For phishing prevention information on social media platforms, check out this blog.

Since phishing is a social engineering attack, it works on the premise that we are busy, distracted, and somewhat undereducated about cyber threats and how they work. Hackers look for ways to pass themselves off as other organizations in the hope that, even if it doesn’t work most of the time, it will work at least some of the time–and it really only has to work some of the time for a hacker to gain access to sensitive information, money, and credit cards.

What’s more, hackers are evolving faster than even tech-savvy students. As universities host student emails, hackers can gain access to emailing list and build highly sophisticated spear-phishing campaigns that will trick students not familiar with email or forgery. These campaigns can include letters that even use a university’s branding and letterhead.

So, don’t fall for the trap. If an email asks for personal information, comes from a shady source, or directs you to a third-party site, just delete it. Keep your information safe and avoid the headaches of being hacked.