What is Cloud Computing?

The phrase cloud computing is one which is often used but infrequently understood. Is the cloud simply a whimsical name for the internet? Could cloud computing be as simple as using someone else’s computer, but over the internet? Some people are even surprised to learn that they’re already using cloud computing – and if you aren’t then there may be some serious benefits that your company is missing out on.

This article will explain what cloud computing is, define its common variants, and offer some insights into when it is or is not beneficial to your small business.

What are the different types of cloud computing?

The expression ‘cloud computing’ gets thrown around a lot – but the reality is that this term is merely an umbrella which encompasses three main types of services, Software as a Service (SaaS), Infrastructure as a Service (IaaS), and Platform as a Service (PaaS). Let’s explore each of these in turn:

SaaS (Software as a Service)

Software as a Service is the most common type of cloud computing – in fact it is highly likely that you’re already using one or more of these services! Almost all email services, Quickbooks, Slack (and most competing messaging services as well), Microsoft 365, Canva, Salesforce, and even Netflix are examples of SaaS!

What differentiates these pieces of software from software of yesteryear is that your ability to use them is contingent upon an ongoing subscription.

While the earliest versions of Microsoft Word were tied to a physical disc with a product key and were yours to use essentially forever, Microsoft 365 is only usable so long as you pay your annual subscription fee.

Some examples of SaaS, like Netflix, operate in such a way that it is difficult to even tell that you’re paying for software! Your subscription fees obviously pay for the rights to stream their content right? But users aren’t allowed to stream Netflix to just any app! All Netflix users must use Netflix’s proprietary software – and there are no open source APIS or other video streaming options which connect to their backend.

While some SaaS install to your local drive (such as the Netflix app on your computer or phone), others are available to access and use via your web browser. Netflix is a great example of software that is available both as a downloadable resource, and as a web application.

Increasingly software is being developed as cloud-native services – meaning that they were designed from the ground up with cloud in mind. Services like Canva, a web-based graphic design service, are only available as web applications – and have no downloadable version available to use.

IaaS (Infrastructure as a Service)

Infrastructure as a Service might sound complicated, but is actually a type of cloud solution which is quite commonly used by consumers and small businesses. The most common type of IaaS is cloud storage, where instead of using networked harddrives for storage solutions, a web-based storage solution is used instead. This includes Microsoft’s OneDrive, DropBox, and Google Cloud Storage.

In the past these remote computing options were of limited utility due to high latency (the time it takes for cloud computers to communicate with your own system) but in recent years high speed, low-latency connections have become common-place. All but the most demanding system requirements can now be easily carried out over widely available internet connections.

Unlike SaaS, IaaS puts most of the control within the user’s hands – simply offloading the physical computing power and data storage to data centers. This is handy for small businesses with ‘peaky’ workloads, offering cost effective alternatives to costly physical servers or on-premise storage which may only be fully utilized a small percentage of the time.

PaaS (Platform as a Service)

While IaaS’s give small businesses virtual machines to work with, PaaS’s give companies a virtual machine which is pre-loaded with software. Rather than develop your own ecosystem, a PaaS allows companies to pay by the user, or pay for the resources used, and have access to a complete cloud platform. This cloud environment is hosted remotely, and includes everything from servers to software.

The big names from the IaaS world also are the dominant PaaS providers, and include Microsoft Azure, AWS, and Google Cloud.

Even household consumers are partaking in PaaS services – although many people don’t recognize it as such. Internet of Things (IoT) devices like smart thermostats, doorbells, security cameras, and smoke alarms operate on remote platforms which users are able to access via apps or their web browser. Your Nest thermostat or Ring doorbell isn’t hosting its own server – but is instead living on the cloud!

Where is all of this information hosted?

While all cloud environments host information remotely, how the information is hosted can vary depending upon your company’s needs.

A public cloud infrastructure is accessible via the internet and offers resources which are shared amongst multiple users. This sort of cloud server, also referred to as multi-tenant cloud environments, are the cheapest option available as the hardware costs are shared across a large number of end users.

However, as public cloud services are accessible by anyone with an internet connection, there is a greater exposure to risk with this sort of environment. Thankfully, with modern encryption protocols and multi-factor authentication, this risk is generally minimal.

Another benefit of public cloud infrastructure is scalability and elasticity. If your company needs to use more resources, cloud service providers are able to allocate your business more computing resources. This process is effectively invisible to the companies making use of it and generally requires no additional work from the users (although in some cases like cloud storage users may be required to sign up for more storage when they approach their limits). 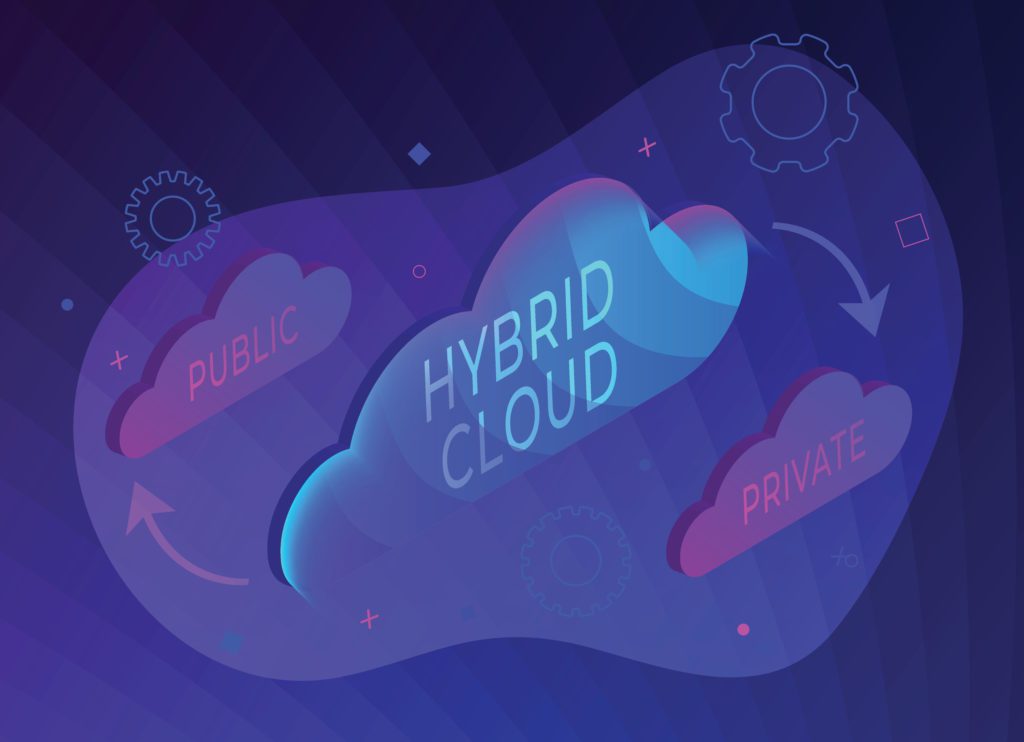 Private cloud infractures differ from public clouds in that the cloud computing services are not shared with any other users. These single-tenant cloud environments offer a greater degree of customization and security than public clouds, although these benefits don’t come cheap.

The security benefits of private clouds include the ability to implement your own firewalls and DevOps protocols, but companies are responsible for managing their own clouds and will need to hire and maintain a team of IT staff along with operating the on-premises hardware necessary to run the cloud on.

For many companies a hybrid cloud infrastructure offers the flexibility of public cloud computing alongside the security and control of private cloud services. In a hybrid cloud environment, businesses may use the public cloud to host their SaaS cloud applications, while sensitive data is kept safely on private servers.

When well implemented, the effect of using a multi-cloud environment is seamless and a business’s end users will be able to switch between public and private cloud resources without even noticing the transition.

What are some of the benefits of cloud computing? 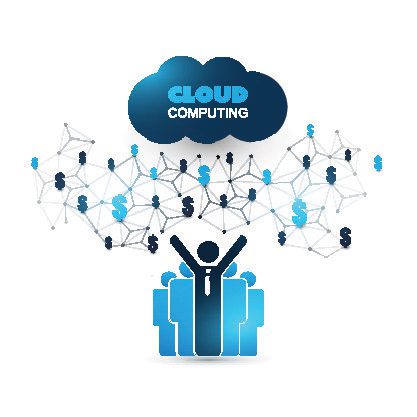 If your company is currently hosting its software on a local server then you may stand to save money by switching to cloud computing. Servers need to be monitored and maintained by skilled technicians and use a surprising amount of electricity.

In addition to the costs of running a server, small businesses need to consider the capital expenses related to maintaining a local server. The server itself must be purchased and then immediately begins to depreciate. While servers and mainframes are generally built robustly and age gracefully, if your business rolls out new software or operating systems, older hardware may serve as a performance bottleneck.

Cloud computing helps companies to avoid the gradual decline in performance over time and switches the accounting from one of capital expenses and depreciation to predictable operating expenses.

This is one of cloud computing’s greatest strengths. When small businesses purchase hardware for their private servers they have to weigh the cost of the hardware versus their predicted future requirements. It is generally unwise to purchase equipment that is oversized, as that extra performance comes at additional cost and will remain unused most of the time.

One option is to simply install upgrades when the time comes, but this can be easier said than done and will involve additional cost and possible downtime as the new system is brought online.

Cloud computing on the other hand suffers from no such limitations. Cloud providers are capable of increasing the amount of resources your company has access to on an as needed basis and offer pricing which will vary in relation to your company’s needs.

An added benefit of this flexibility is that if your company has extremely variable or ‘peaky’ computational needs the cloud environments are able to offer more computing bandwidth on an as-needed basis. For startups who are operating on a tight budget this can provide the capability for high-end processing without the capital expenditure of high-end equipment.

A huge advantage of cloud computing is its accessibility. Unlike private servers, public cloud providers offer real-time access from anywhere in the world. In a world where more people are working from home this is almost immeasurably valuable.

A common argument against work-from-home is that employees won’t have access to the resources they need to get the job done – cloud computing offers a solution to this issue.

Another benefit of moving your business’s resources to the cloud is that cloud security is baked in from the start. Whenever companies try to implement remote access to private servers they are introducing an element of danger – but cloud providers have already taken steps to mitigate these risks and generally offer more security than a typical small business is capable of implementing themselves.

Should I move my business to the cloud?

The short answer is: It depends. If you’re considering moving your business to the cloud you should first have a professional take a look at your IT infrastructure and determine where implementing cloud computing will most benefit your business.

For most companies, cloud computing offers at least some degree of benefit. Every use case varies of course – some businesses may need cloud based automation, while others might only use the cloud for its disaster mitigation and business continuity assurances.

Whether you’re ready to make the move to the cloud or want to know how you can optimize your existing cloud services, Bristeeri Tech offers managed IT service solutions for small businesses. The time to modernize and move to the cloud is now – don’t miss out on the cost savings, scalability, and flexibility that cloud computing has to offer.

← Cybersecurity Trends that will affect Small Business in 2022 What Does A Hardware Firewall Do? →
